As you might have seen, the networks are at it again, on a drive to get the government to regulate web services, which these network operators like to call OTT Providers.

Regulating Internet services will have a huge ripple effect through our economy. I don't even want to start thinking about how badly this could be implemented. Just look at how difficult it is to do basic admin these days.

How on earth would this even be managed? Can you imagine Facebook opening offices in every city or appointing officials in small towns to do RICA just so South Africans can talk to each other via their network?

I don't see this happening, it is counterintuitive and anti-Internet to add such labour intensive processes to the sign up process. If Vodacom and MTN have their way and companies like Facebook and Google are somehow forced to add complex and unnecessary red tape, to the sign up and account creation process, all that will happen is they will pull out of the country.

Fighting for regulation instead of innovation

While organisations like Digital Village, Project Isizwe and the Western Cape government are making an effort to get more people online and bring communication costs down, companies like Vodacom and MTN are publicly making an effort to screw the South African consumer.

They sell bandwidth to consumers and then if you don't use it within a certain amount of time, you lose it. Imagine buying a hamburger but because you don't eat it fast enough the restaurant throws it away. There is no way we would accept that from anyone in retail so why on earth is it acceptable from a cellular service provider?

I've been a Vodacom customer for going on 18 years now and I've generally been pretty happy with the overall service even if I haven't been happy with the pricing. I have however reached the point where I feel we need to start threatening to cancel our contracts and move to operators like Cell C who are embracing the future.

They (networks like MTN and Vodacom) need to realise that they are nothing more than utility companies. The only value they have to offer us in the long term is faster connectivity and wider network coverage. There is, however, nothing stopping them from investing in Internet based startups or creating their own OTTs. Why not rather be productive and contribute to society by incentivising innovation or running their own accelerators or incubators. They could even establish investment vehicles to push our economy forward, in new directions, leveraging their core network and embracing new technologies instead of spending time, effort and money on slowing down progress with legal/regulatory proceedings and attacking companies offering services that benefit the community and economy.

Part of what is so infuriating, about this whole situation and some of the accusations being thrown around, is that both Vodacom and MTN are also commercial ISPs, operating data centers, home to what they themselves refer to as OTTs; they should know that anyone operating a cloud service(OTT) pays for hosting and bandwidth utilisation as it's one of their sources of revenue.

Every cat picture and meme you look at on Facebook costs both you and Facebook money to transmit over the Internet. The same goes for watching videos on Youtube and you guessed it, Netflix.

They either rent data center space or set up their own data centers. They need to pay for connecting to ISPs and either pay for bandwidth used or for dedicated bandwidth/pipe.

Think of it this way. At home you can either have capped or uncapped ADSL. If you have capped ADSL you pay for data used and if you have uncapped ADSL you pay for the size/speed of your data pipe/connection, in other words the amount of data you can transmit per second. Uncapped connections usually come with a fair usage policy which sets an upper limit on how much bandwidth you may transmit either via upload or download, during a 30 day period, before being throttled to an almost uselessly slow speed. These same concepts apply to the tech giants but on a massively different scale. Instead of needing to worry about megabytes, they're working with terabytes and petabytes. All of this costs real money.

Myth 2 - OTT services are being used for free

The utter cheek and audacity, of network operators, to complain that accessing OTTs is free is unbelievable.

Users a.k.a. paying customers access the Internet either through purchasing data bundles from ISPs/mobile networks or paying for network access in the form of a monthly subscription. Once on the network, users can access hosted websites and services, all of which use bandwidth which they have paid for.

Below I outline some differences between the traditional and modern (Internet) engagement and billing models. 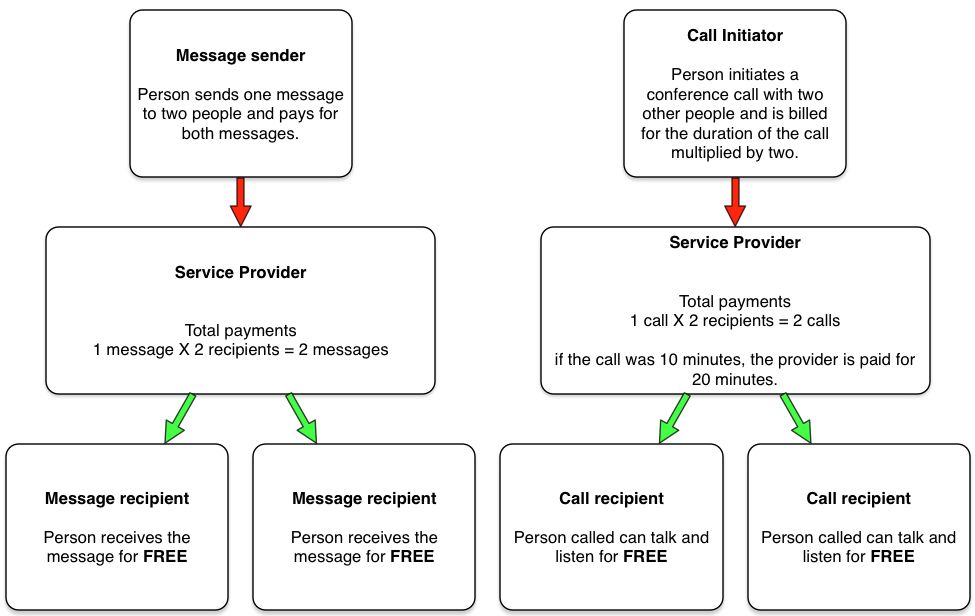 In the old model, the person initiating the phone call or sending the message is the only one who pays for the communication[1].

Remember the days of the "please call me"?

A "please call me" would allow someone without airtime to send a free message to someone else (presumably with airtime) to call them back. The reason this worked and was viable is because the person who initiates the call pays for it so the person being called, in this case the person who sent the "please call me", does not need to have any airtime as their participation in the conversation is free. They could both listen and speak without incurring any cost.

Internet based voice and messages

There is a big difference in how Internet based services work compared to the traditional model[2].

In the modern Internet world, the networks being operated by the telecommunications companies, whether it be cellular or fixed line, provide a data conduit/connection through which devices can communicate with each other. All devices on the big inter connected network, also referred to as the Internet, pay to participate and pay for data traffic in both directions.

With this in mind, any OTT operator doing their job properly will be using compression and efficient encoding to reduce the bandwidth being used by their service as it costs them money to operate. This leads to less strain on the network and smaller data packages being sent between devices. As a result of this, modern Internet based communication is more efficient and generally uses the least possible amount of data required to get the job done. This is good for everyone, even the traditional ISPs, as it reduces the load on the networks. It might not result in surges in data usage (and revenue) up front but long term it results in faster Internet adoption and more users spending money to get online and do business online.

Due to both directions of traffic being billable, all parties pay to be part of a conversation. Whether it is a VoIP call or a group chat via IM users pay to both send (upload) and receive (download) data. This means the more people participating in a conversation, the more bandwidth is being invoiced, even if only one person is sending the messages or speaking.

Regulation will affect everyone

Tell your friends and your family. Help them understand the deep reaching impact, should Vodacom and MTN get their way. This is an issue that will affect us all. The definition of OTT is vague and could eventually be twisted and applied to this very website you're reading this post on.

I'm one of those people who has essentially abandoned the Adobe way. I install all of my apps from the App Store and that is the way I like it. The news that Sketch will no longer be distributing through the App Store is fucking sad. Apple, you need to

Currently my iPhone's battery is sitting at 5 percent. It's been on for more than 7.6 days and it could probably go for a few more hours. How do I get my phone battery to last so long? I don't install useless shit on it. When I got my

So you have an idea but you can’t code (yet) and you don’t have a budget to hire someone to build it. Perhaps you’ve tried to find a developer with a passion for the same ideas/problems as you but you’ve found it difficult to find